Julie and Martin – Love in All its Simplicity 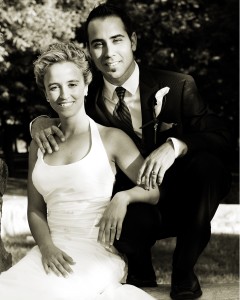 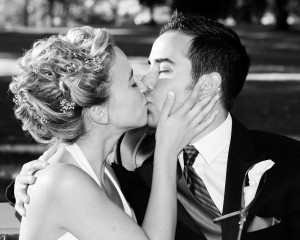 If Martin and Julie's story remains to be written, their meeting in a French course over 15 years ago at the Cégep du Vieux Montréal marks the beginning of a bond that has endured since 1999. Seated at her desk, Julie can't help but hope that the young man she has just noticed (Martin) will come sit near her. However, it isn't until several weeks later, after days of glimpsing at each other, that they talk for the first time during a team project. Over the course of their next encounters, they forge an emotional bond and their relationship becomes a lifelong commitment.

A few years later, while celebrating Julie's 30th birthday on the summit of Mont-Saint-Hilaire, they decide to unite their destinies and Martin places the famous engagement ring into the palm of Julie's hand.

Four months later, Martin and Julie would both say "I do," surrounded by members of their families. As they share the same vision of the ideal marriage, which they both wish to keep as simple as possible, the wedding preparations are made quickly and smoothly. From the invitations to the organization of their wedding and their preferred atmosphere, the couple perfectly agrees on their definition of the ideal wedding day.

Julie quickly finds the dress of her dreams. She falls in love with it at the first fitting: a simple, elegant backless dress in the mermaid style. A few curled strands falling from her loose chignon decorated with flowers and a bouquet of lilies are a perfect complement to her dress.

To keep a certain mystery and respect tradition, Martin and Julie decide to spend the night before their marriage away from each other. The morning of the big day, Julie gets ready at her brother's house where a photographer captures some of the most beautiful moments of the day. Martin, for his part, is also accompanied by a photographer at home where his mom and dad help him get ready. 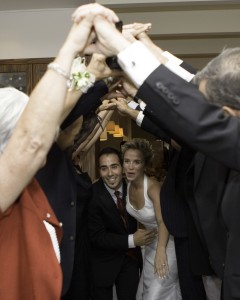 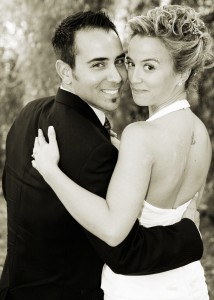 For a warm and intimate atmosphere, the ceremony and reception take place in a family restaurant in Vieux-Longueuil; Chez Parra. After arriving at the location and passing through the welcoming arch formed by their guests, Julie joins Martin who is waiting for her under the canopy. A sense of solemnity and magic bathes the atmosphere, with captivating music and lyrics by Jason Mraz interpreted by the musicians on site. A short and simple ceremony unites them before parents and friends.

The newlyweds then lead their guests into the reception room. Decorated in red wedding tones in the style of the selected restaurant, with pretty accessories, red gerberas and large, white, welcoming tables, the room emits a relaxed and warm ambience. Welcome to Martin and Julie's wedding.

On the menu, five choices of fine French cuisine to satisfy every guest's taste. With this in mind, the couple came to an agreement with the owner to concoct a personalized menu, taking inspiration from the restaurant's own bill of fare. For dessert, guests have a choice of several short-glass appetizers presented on a handsome platter. Friendly staff is attentive to each person's needs.

Martin and Julie took care to plan some entertainment (a magician and musicians) for their guests while they leave to take their traditional wedding photos in a park in the neighborhood. Guests can also take advantage of the disposable cameras left on their tables to capture the most beautiful moments of the evening.

After dinner, the musicians leave and the DJ begins leading the traditional wedding games. For an even livelier atmosphere, the couple chose to secretly learn a choreographed dance and surprise their guests during the first dance. "I was finally able to convince Martin," says Julie with a glimmer of delight in her voice. At the first notes of a classic melody, they waltz together and then transform into zombies to Michael Jackson's hit "Thriller," accompanied by some of their relatives and friends who were in on the fun. What a surprise and a beautiful way to kick off the evening. "There was no room left on the dance floor and we danced all night long. It was enchanting."

At the room’s exit, a pretty notebook personalized with images of the couple (photos of some of their best times) serves as a guest book in which guests can leave a little thought.

Martin and Julie were able to organize a simple wedding while remembering to plan a most spectacular reception for the enjoyment of all and to the satisfaction of the newlyweds, whose memories of the day will last forever.

Consent   By submitting this information I understand and accept that Mariage Montréal and Montreal Weddings may use this content (text and pictures) in their communications and advertising, including social media.

The Meeting • How did you meet? • What attracted you to one another? What made you fall in love? • Tell us about the proposal The Wedding Day • how did you envision your big day? • Describe you day • What title would you give your wedding story? Wedding Vendors • Names of the vendors that have worked on your wedding • Can you comment on the work of those vendors?